UFOs: the age of innocence!

Two treats for 1950's nostalgia fans; the work by Johnson is a reprint of his unpublished 1950 thesis 'Flying Saucers, Fact or Fiction', a Masters thesis in journalism at UCLA written in August 1950, making it the second UFO book ever written, after Keyhoe's Flying Saucers Are Real, but before Scully's Behind the Flying Saucers. Johnson's however never got published. It consists of chapter abstracting various news clippings, then interviews with believers, sceptics and a study of the psychosocial aspects of the reports. Johnson concludes flying saucers are real, but more probably American than Martian. The main interest may lie in his portrayal of, the nervy almost paranoid Ken Arnold, strumming on the desk while being interviewed to avoid his voice being recorded (He perhaps had reason to be paranoid, the journalist concerned was secretly recording him).

What we get here is almost UFOs before ufology, though some of the themes were already coalescing The image of the flying saucer itself was still fluid, and indeed Johnson concluded that the 'real' flying saucers were the cylindrical things such as allegedly seen by Chiles and Whitted and that Arnold saw something like weather balloons.

As early as 1950, some of the themes that Magonia has promoted were being commented on, for example that the Navy School of Aviation Medicine had already determined that staring too long at a fixed light could induce vertigo and a kind of hypnosis in which pilots could dog-fight with stars or mistake ground lights for other aircraft, flying saucers or whatever, and even have outright hallucinations: "when a flyer starts chasing an illuminated weather balloon or star and vertigo and hypnosis sets in, the pilot can come down and practically tell you how many rivets were on the nose of that Martian space ship". In the chapter on the psycho-social aspects he reports on some pretty sophisticated speculation for 1950. 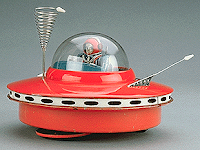 We can see this fascination in the wide range of excellent visual material in the Neshiems' book, which considers flying saucers and space invaders as a topic of pop art and kitsch. Colour illustrations from book jackets, magazine covers, (both UFO and SF), film posters and publicity material, and a wide range of toys. There is a model flying saucer from the mid 1950's with a green, large headed, small bodied pilot, who must have been based on the Mekon. There is the cover from a 1960 paperback edition of The Midwich Cuckoos, which features a pair of glowing disembodied eyes, as reported by Barney Hill. There is the 1957 Jack Davis drawing depicting a crashed saucer, half buried in the New Mexico desert, which is virtually identical to some of the claimed Roswell testimony descriptions. Which came first (did anyone ever ask Davis, or did he die long before the modern Roswell legend started)

What emerges from both these books is the extent to which the flying saucer imagery and mythos permeated everyday life. One did not have to read flying saucer books and magazines to know what flying saucers looked like (It was the same in Britain. I dimly remember being on a kiddies' flying-saucer ride in Lewis's department store in Manchester when I was very small, must be 1953-55, long before I knew that flying saucers were mysterious).

The Neshiems see the pop culture of flying saucers as reflecting the anxieties of the age of the cold war, in which Martians and Communists were virtually interchangeable. As Johnson finished his thesis, he reported the start of the Korean war, and his fear that the cold war was going to get hot. His name never reappeared in connection with ufology, and Thomas and Childress were unable to track him down. Could it be that he, a young man in 1950, was destined to be one of the victims of that conflict? -- Reviewed by Peter Rogerson, from Magonia 65, November 1998