In this book Paul Devereux refines and redefines the earthlight hypothesis he first promulgated in book form almost ten years earlier. The bulk of the book is an account of a wide range of light phenomena from around the world, although chiefly in Britain, North America and Scandinavia. These include the various 'spook-lights' of the USA, a number of historical cases from Britain, including the Egryn Lights of 1904-5 and the remarkable phenomena seen at Burton Dassett, Warwickshire in the 1920s, as well as details of contemporary phenomena currently being investigated as part of 'Project Pennine'.

These events are, it is claimed, part of a single phenomenon: the production of atmospheric lights by the actions of strains, tensions and subsurface movement in the Earth's crust. The arguments hold up remarkably well: many of these phenomena indeed do occur at sites of particular geological faulting. The Egryn Lights aligned almost exactly with the significant Barmouth Fault - a chart shows the impressive concentration of the reported lights close to the time of the fault, and their rapid falling off away from it. Again, important light phenomena are associated with earthquakes and areas of seismic activity, particularly in Japan and the American West Coast.

Devereux notes that within the general range of unexplained lights there is one specific type which seems particularly significant; usually 'tadpole' shaped, it seems to possess an inner structure comprised of a mass of tiny points of light, pulsating with some form of energy. Of particular interest is his claim that Kenneth Arnold's seminal UFO sighting of 1947 was of a group of lights associated with seismic conditions in the North West USA (it took place very near the active volcano of Mt. St Helens). 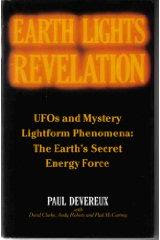 There is no doubt in my mind that a real phenomenon is involved here. I can see no serious reason not to accept, as a working hypothesis at least, that a range of aerial light phenomena are the result of geological activity, and this book is the best move yet towards substantiating that claim. My doubts start to creep in when I realise just how much this highly-likely but not-yet-proven phenomenon is supposed to account for.

I am always suspicious of once and for all UFO explanations, whether they be ETH, secret weapons, mirages, ball lightning or earth lights. Why, I ask myself, do American spook lights have a tendency to follow disused railway lines, whereas British ones never do? Can we really accept that the Welsh lights of 1904-5 had nothing to do with the extraordinary social conditions of the time, with which they were explicitly linked by contemporary observers? Do the concentrations of lights in particular areas at particular times (the present wave of North Wales sightings, for instance) have to do with geological conditions, or with the fact that a particularly active and motivated researcher happens to be around on the ground? I am sceptical of the ETH as a source of UFOs because I know how widespread and impressive misinterpretations of other phenomena can be. I am not prepared to suspend that scepticism when considering another hypothesis just because it is one I feel intellectually more comfortable with.

The most controversial part of Devereux's Earth Lights, his original book, was the claim that the light phenomenon reacts to human consciousness. In this book the claim is still there, but somewhat toned down. His main argument for this, apart from some rather dubious observations from Harley Rutledge's flawed Project Identification and some extremely equivocal reports from Hessdalen, is his own personal experience of a aerial phenomenon from his student days. Yet this is such a perfect example of cultural conditioning influencing the perception of an ambiguous stimuli (Devereux sees a peculiar cloud as an angel, another art student sees Michelangelo's 'Universal Man', others with him at the time see nothing in particular) that I find it hard to see it as anything other than vindication of the psychosocial hypothesis.

Devereux will argue (has argued) that, of course, I was not there at the time to see the vision. Naturally, but this is the argument used by every abductee and contactee and their eager proponents: I was there, I know what happened; my personal vision is the universal truth, Devereux rightly questions this line of reasoning when the percipient involved is a poorly-educated woman in Kentucky claiming contact with grey-skinned creatures from another world. He cannot expect us to accept it at face value just because the visionary experience is now being reported by a literate and respected researcher.

Having said that, this is a fascinating and important book, certainly far more significant to the development of ufology than any of the current crop of abduction books that are pouring from the presses. And Devereux has some important things to say about abductions as well, postulating a mechanism for their production which may point to a process by which the psycho-sociological explanation can be linked to physical stimuli. This may go someway towards providing an answer for those who feel that conventional psychological processes are not adequate to explain the nature of the abduction experience. His analysis of the Kathie Davies ('Intruders') case is intriguing and deserves consideration even by those who do not accept the general thrust of his arguments. It seems certain that some kind of electrical phenomenon, either 'earthlights' or some more conventional lightning related phenomenon, forms the physical core of this experience. This has, of course, been ignored by the abductionists.

Earth Lights may not be the explanation for all UFO sightings, or even the majority of them - particularly the close encounter cases - but further research along the lines indicated by Devereux promises to be one of the most productive fields of research in ufology in the next few years, It is to be hoped that ufologists will be able to rise to the challenge.  -- Reviewed by John Rimmer, from Magonia 35, January 1990.