Graham Phillips and Martin Keatman. The Green Stone. Spearman (Jersey), 1993.
Bamber Gascoigne. Quest for the Golden Hare. Cape, 1993.
🔻
One of the leading figures in The Green Stone has been hailed, rather tactfully I thought, as an exponent of 'belief-oriented' investigation. If this book is to be taken as an example of that genre the technique would appear to depend much more on belief than investigation.


The search for the 'Green Stone', a talisman of allegedly magical properties, is carried out across the face of England, largely under the direction of a young lady from North Wales who receives telepathic or mediumistic instructions to pass on to our valiant belief-oriented investigators. They then rush from megalith to megalith beating off titanic psychic forces and battling with the spirits of Victorian magicians in dank basements under Stoke-on-Trent, in the process uncovering a variety of strange artifacts including a theatrical property sword, a brass box which looks remarkably like the one my mother used to keep the rent-money in, and the eponymous 'green stone', which by some strange quirk of fate just happens to be impossible to photograph.

No doubt my would-be jokey summary is grossly unfair to at least some of the people involved. But this whole farrago is offered without the slightest fragment of evidence, and no indication that any of the dramatic events described in the most purple of prose -- "The cry came again, nearer and higher, climbing skyward from the dark copse. Towards them. Terry, Alan and Graham broke the circle in fear. Again Marion pulled them back, shouting at them to stand firm. Then the noise was overhead, circling, and swooping in the darkness, a sickening shrieck seizing their minds and bodies with fear" etc., etc., etc. -- ever actually happened outside the imaginations of the people concerned. Not being a belief-oriented reviewer I came away from this book with the feeling only that the authors do for North Staffordshire what H. P. Lovecraft did for New England.

An essential part of the belief system of the protagonists of The Green Stone seems to be a great faith in the importance of coincidences, and the ability to find significant clues all around them. Both these faculties are to be found in plenty amongst the characters described in Bamber Gascoigne's The Quest for the Golden Hare. 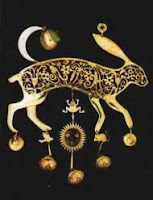 This is the story of a golden jewel in the shape of a hare crafted by the artist Kit Williams, and buried secretly as a reward to whoever could decipher a series of clues skilfully hidden in his beautifully illustrated book Masquerade. Many thousands of people across the world took up this challenge, and found themselves caught in an adventure as full of coincidence and hidden significances as anything in The Green Stone.

Just like the protagonists of the Green Stone 'mystery' the 'Masqueraders' find that their clues, no matter from what source, no matter how ludicrous to the disinterested observer, all begin to make sense in the world they are creating for themselves. A casual word from a stranger in a pub is seen as a vital piece of evidence in the hunt for the Stone; an empty whisky bottle found on a public common is a sure indication that the golden hare is close at hand. Impeccable pseudo-logic and elaborate word play convince both sets of searchers that they are on the path to their goal.

And what, ultimately, is this goal? Is it an unphotographable piece of rock, or even a beautifully crafted piece of jewellery? Or is it a chance for the searchers to realise their own importance in the cosmic scheme, untrammeled by the common herd? Phillips, Keatman and company save the world from unnamable horrors by interpreting the clues and messages laid for them by occult forces; the Masqueraders find that they are playing against more than an eccentric artist and a TV personality.

One of the hare-hunters, Ron Fletcher, claimed that one of the clues which indicated he was on the right track was a flypast by the Red Arrows aerobatic team releasing streams of coloured smoke. Bamber Gascoigne protested that it would be impossible for Kit Williams to arrange something that elaborate. Earnestly, Ron insisted that Williams was just a front, and that the power behind the masquerade is more important  than him: "If you really want to know," he revealed, "it has to involve the Queen, it has to go as high as that."

How pleasant it must be to know that one is saving the world from a terrible fate; or is locked in an elegant battle of wits with the Queen of England. Few of us boring old fogeys have ever done either, but then few of us have ever been lured into the extremes of obsession that these books, in their different ways, describe.

I suggest you read the Green Stone, as fact, or as a ripping yarn, or as a warning, but I suggest strongly that immediately afterwards you read Quest for the Golden Hare. Although it may surprise Bamber Gascoigne, I feel that he has written one of the most important books on ufology and the paranormal that I have read in a long tine. It is essential to any evaluation of the works of 'belief-oriented' investigators like Collins, Phillips and Keatman. -- John Rimmer