Allan Hendry, The UFO Handbook: A Guide to Investigating, Evaluating and Reporting UFO Sightings. Doubleday, 1979.
🔻
The scope of this book is belied by its title, which suggests another of those tedious 'how to investigate' UFO manuals compiled by people who think that bureaucracies don't produce enough paperwork already. This is a very great pity, as it is in fact one of the most important, objective and critical studies of the UFO experience yet published.


Hendry, a commercial artist, is a friend of Dr Hynek, and when Hyneks's CUFOS was given funds allowing it a full time employee for a year in 1976-7, Hendry got the job. His main task was editing the newsletter, and answering the 'UFO Hot Line', a service operated via local police departments. It is the 1,307 cases so received which form the base for Hendry's discussion and analysis; so he is discussing actual UFO reports, and not someone else's UFO records.
No fewer that 1,158 of the cases were identified as being generated by identifiable mundane stimuli, IFOs (88.6%). Now it is clear that this category was not generated by guesswork, but by definite, positive identification. Furthermore, by the very nature of Hendry's procedure, the higher the strangeness of the IFO, the more positive was the final identification. 113 cases (8.6%) were unidentified, though a fair proportion of these were problematic or marginal cases. 36 cases (2.8%) were unusable for the statistical sample. 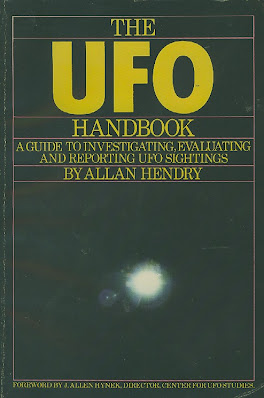 In this book Hendry was done what, to my knowledge, no other UFO researcher has done. He has conducted statistical and phenomenological studies not only on the UFO cases, but also on the IFOs. There are some very surprising results.

Most IFOs were misrepresentations of very common objects. A very high proportion of IFOs turned out to be night advertising planes. This is an example of a culturally-determined IFO. The content of IFO reports in countries such as the UK which do not have advertising planes will be very different, and perhaps the public perception of what constitutes the UFO phenomenon will be different too.

One notes the extreme rarity of complex 'Menzelian' meteorological phenomena as sources of IFOs, and the total absence of ball lightening. A breakdown of the sources of IFOs shows that over 92% are generated by just seven categories of events: Stars and Planets (32.8%); advertising planes (21.8%); aircraft (19.3%), meteors and satellite re-entries (10-5%); balloons (4%); satellites (2.1%); and the Moon (2.1%)

The phenomenological analysis of IFO cases is startling. Extreme emotional responses are recorded in a significant number of cases. What is one to make of IFO case no. 871, where a star changing colour, caused one witness to pray, fearing the end of the world? Or the terror provoked by the Moon in case 280 which "made my hair stand on end"? Or sightings of stars which caused responses like "scared to death", "torn between terror and curiosity", or "a sign, premonition". This sort of reaction makes one wonder if there are any clear dividing lines between IFOs and UFOs.

Hendry lists UFOs as "Near IFO; problematic; good; excellent-best"; so listing with IFOs by Hynek category, we get:

These figures are not completely revealing. For example many of the problematic CEls and all the CE3s are listed because of single witness status, while some 'good' nocturnal lights and daylight discs are not at all impressive. One significant fact which emerged from a detailed study of the stimuli of IFOs is that it is not necessarily the intrinsically strange event (such as the ad-planes) which generate CF2s, but 'normal' objects like stars or ordinary planes. This suggest to me that something going beyond 'misrepresentation' is at work; and that the initial misperception may act as a trigger for a deeper hallucinatory UFO experience.

In his second section, dealing with tools of research, Hendry also takes an iconoclastic line; animal reactions are also provoked by IFOs, and the idea that animals should react to UFOs has already penetrated into at least the American public consciousness. Lawson's experiments throw a cloud over regressions, and Hendry shows it is not the royal road to the truth. Multiple witness cases are more likely to be IFOs (74% of IFOs were multiwitness), but are useful for cross-checking accounts although even independent witnesses can be reporting IFOs.

Hendry is contemptuous of the press's handling of UFO reports: endless IFOs classed as UFOs, counterpointed against fatuous 'expert' debunking.

Hendry criticises previous statistical studies for error in data base. It will come as no surprise that IFOs obey the 'Law of Times'. One interesting feature is that he completely fails to duplicate Vallee and Poher's graphs showing a radical divergence between duration of experience for UFOs or IFOs. This may be explained by assuming that Vallee and Poher chose only two types of IFOs (meteors and astronomical) which bulked up the two extremes, whereas Hendry had a much wider sample of IFOs (remember those ad planes)

He also points out that UFOCAT, for example does not have a consistent database, which undermines it effectiveness. However, Hendry should be careful here, as his own use of statistics is somewhat suspect, as he operates on absurdly low data bases(as low as sixteen cases at one point), in trying to demonstrate that the strangeness of a report is inversely related to population density. I suspect he is right, but a much larger sample would be needed to be sure.

He concludes the tools section with a critical look at the ufologists themselves, and no-one escapes. The drop in normal critical guards by scientists, the emotional need for an all-or-nothing anomalistic explanation, and the unwillingness to consider prosaic explanations, are all deplored. It takes an outsider to see the full craziness of the UFO circus.

Rather confusingly, much of Hendry's conclusion appears in the middle of the book, under the title 'Message of the UFOs' Here he develops an alternative psychological hypothesis and gives a generous mention of this bulletin. It is clear that Hendry's thinking has been running on parallel lines to ours, and quotes Ronald Siegel on the prevalence, and the occurrence of abduction-like features in drug induced religious experiences (sensations of floating, travel in tunnels, tubes, saucers, etc.)

He clearly appreciates, more than most writers, just what Jung was talking about; yet he seems to draw back just at the last minute. For example, he castigates this reviewer for not mentioning radar/visual cases in his article 'Doves are Just Middle Class Pigeons', and disposing of 'physical evidence' in three paragraphs. This takes things out of context. It seems to elude most ufologists that radar/visual cases do not constitute 'physical evidence', which can only mean evidence which outlasts the experience.

No doubt Hendry is partially correct in arguing that symbolic psychological interpretations of individual cases are best restricted to high strangeness stories. For low strangeness stories (the great bulk of IFOs) a general sociological hypothesis may be best.

Hendry is incorrect in describing INTCAT as a collection of the most exotic CEs; the arbitrary 30m height limit lets in a number of very unexotic entries: I plead guilty of being willing to allow the door to remain a little ajar for 'paranormal phenomena', about which Hendry is, I think, too severe.

Hendry is quite honest about his hope that some new phenomenon may be found in daylight discs, and suggests that close encounters may be a "fantasy attempt to bring the more obscure nocturnal lights and daylight discs into a desired formula or resolution or focus", and perhaps hopes to limit 'psychological' explanations to the Close Encounters. Yet his own evidence shows the immense amount of fantasy material in the low-strangeness cases, and I doubt that curiosity about Daylight Discs is a major source of fantasized close encounters (unless they are called into being by the social needs of ufologists).

Rather, it strikes me that a powerful rumour provides a focus for a wide range of fantasy material. However Hendry is perfectly correct in not drawing a quick QED. Perhaps some of the focii for UFO fantasies are very interesting phenomenon indeed - there are several cases in INTCAT strongly suggestive of novel physical phenomena.

This is without doubt one of the most important works on UFO research yet, and it is required reading for all UFO researchers. I wholeheartedly recommend it.  -- Reviewed by Peter Rogerson, from Magonia 2, Winter 1979/80.